As set out in the book (chapter 8), after a brief period in the early days of the motorcar when input from owners was actively encouraged by manufacturers and some of their ideas in fact incorporated into new products, soon a phase set in when the industry effectively barred input from owners. This has only got worse over time with those of us keen to engage with the technology of our cars involved in a virtual war with the manufacturers, who make it increasingly difficult for owners to engage with the technology in the cars for which they have paid good money. Yet at the same time, other technological developments, such as the increasing use of computerized systems in cars, the spread of the internet and communication media such as YouTube improve the sharing of information such that owners are empowered in their engagement with the technology. Engaging with your car in this way is important in building a longer term relationship with it and to illustrate that one can often circumvent the barriers imposed by the manufacturers, I give the example of the replacement of the wiper motor on my Smart Roadster Coupe.

These cars – like so many modern cars – have a number of flaws. One of these is the fact that the rainwater collection tray ahead of the windscreen is really too small for serious rain showers. The result is that on early versions these trays overflow with water leaking onto the electronic control unit, resulting in all sorts of weird and wonderful problems. On my late model (2005) this was largely solved, but what remained was the amazingly stupid location of the wiper-motor in the middle of this tray. As a result of this location, a heavy shower also resulted in the whole motor being submerged. Electrics and water do not mix well and the life expectancy of these units is therefore often limited, particularly in the wet climate of Wales. The symptoms of failure of the unit are basically an inability to switch off the wiper. This happened to me, so I knew the time for action had come. An Austrian website helpfully pointed out that the Smart shares its wiper motor with various VW models, replacements for which are cheaper. However, it was also suggested elsewhere that the Smart versions had acquired improved sealing. The internet also had suggestions of how to take the thing to bits and refurbish it, but I decided to get the proper new Smart unit. 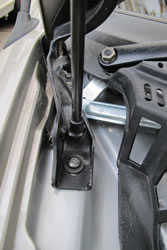 On my classic 1971 DAF 55 Coupe exchanging the wiper motor would probably take me about 15-20 minutes. I estimate this, because after more than 40 years it is still on its original wiper motor, of course. On the Smart it took rather longer, as it is of course far more difficult. The motor is located, as explained, within the rainwater collector tray, but it is also covered by the plastic grill section just in front of the windscreen. This tucks in under the front wings – nice! In order to gain access, first you have to remove the front luggage bin/trunk, which is easy; it is held in place by 4 short bolts. Lift it out and many key mechanical and electrical parts are revealed. However, we now move to the top section as we next have to remove the bonnet/hood. This is held in place by bolts at the bottom of the hinges right next to the windscreen/windshield and as it is made of plastic is not heavy – lift it off and put it somewhere safe. 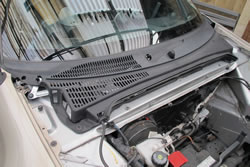 Next, remove the wipers, but do remember the position they were in. Removal of the wipers proved difficult in my case – again, it is not my classic DAF, where this would take mere seconds. I had to resort to a special puller to dislodge the wipers. You may be luckier. 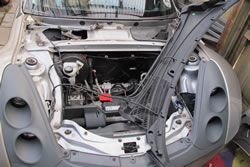 We can now start undoing the bolts for the plastic grill panel just ahead of the windscreen. Once these have been removed, the grill is still stuck, because – as I mentioned – it is tucked in under the front wings/fenders. However, it is much bendier than you might think and it is possible to pull it out from under the front wings/fenders without damage. Do make sure the windscreen washer hoses are safe. I left them attached and moved the panel to the side (see picture), but you could remove them and put the panel somewhere safe. 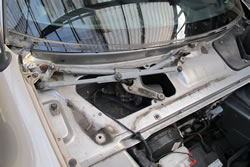 We can now clearly see the offending wiper motor. 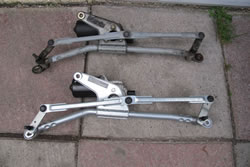 The next phase is easy-peasy. Just undo the bolts holding the motor in place and lift out. You can now either refurbish and refit, or do as I did and invest in a new unit and just fit this. As they say in the manuals: 'refitting is the reverse of removal' – rarely true, but here it is. It is of course important to make sure that the new part is the same as the old one; again, you would be surprised… 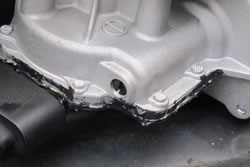 I did notice that the sealant on the new unit was somewhat more comprehensive than on the original – it is always nice to see people learning from their mistakes, although you would think that after 125+ years of car making, Mercedes-Benz and its related companies had worked out how to make them properly. I still decided to add some extra silicone sealant to it, just in case (the messy black stuff in the picture – I am not a perfectionist). Once firmly secured, refit the grill panel – this is of course quite fiddly, as not only does it have to tuck under the front wings, it also has clips that fix it to the bottom edge of the windscreen. This is not that easy, but can be done, as the whole piece is quite flexible – reverse of removal indeed! 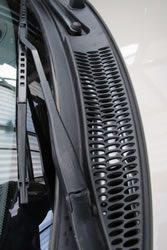 Once you have that grill back in situ, the rest is relatively easy. You refit the bonnet/hood, making sure it aligns properly. Also make sure that all the washer hoses and electrical wiring is safely tucked away before refitting the boot/trunk box. Fit the wipers – I actually did this earlier to make sure it all worked before putting the bonnet/hood back on. And with a bit of luck, you will be able to see your shiny new wiper motor through the holes in the grill just to remind you of your fine handiwork. It took me about an hour in all, although this could probably be improved upon.

You have now beaten the manufacturer, who wants you to take your car to the dealer to have this work done, but you have working wipers as a result of your own effort and preparedness to engage with the technology in your car. There are of course far more complex jobs to do on a car; and much easier ones, but the principle is the same.