SCP: Sustainable Consumption and Production
Changing our Relationship with Cars 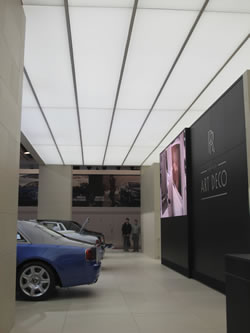 I have spent much of the past 25 years or so trying to work out how we can have our car and be sustainable at the same time. Most of my fellow environmentalists would argue that is impossible and that people should just give up their cars and use public transport, walk or cycle instead. That line of argument is a bit of a dead end, because most people are just not going to do that. In fact more and more people in countries like India and China are taking up car ownership and car use in droves, because cars are just very appealing even where they are not the most practical or sensible transport mode. It is important to realize that a car is much more than a transport mode and that it is this range of other qualities that hold much of its appeal.

This puritanical streak in environmentalism may well be one of the key obstacles to our genuine desire to become more sustainable. What we probably need to work towards is a different mindset, a different way of looking at the world that will by itself make us think in a more sustainable way, while still enjoying ourselves and our stuff, including cars. In order to bring this about we do need to change quite a few things, though. I would argue that we need to see ourselves more as the integral part of natural systems that we actually are; the notion we have developed over the centuries that we are somehow separate from, if not superior to the rest of creation is clearly wrong. We are an integral part of the system on our planet and the notion of 'nature' as something separate from us that we can engage with as and when we choose is also wrong.

This is a big thing; this line of thinking requires a completely different mindset, affecting not only our view of ourselves but also necessitating radical changes to our institutions, our understanding of economies, our education systems, our approach to research and knowledge, etc. In my book, Sustainable Automobility; Understanding the Car as a Natural System I explore some of the implications of this way of thinking, using the car and the automobility system as an example with pointers of how we would need to change. One way we would have to change is in our attitude to stuff. Rather than seeing goods as of little value and essentially disposable, with short useable lifespans, we should see them as fellow-presences on our planet with which we need to build long-term relationships. Only by valuing our things in this way can we make our consumption more sustainable. It does mean that our things need to be capable of sustaining such long-term relationships. 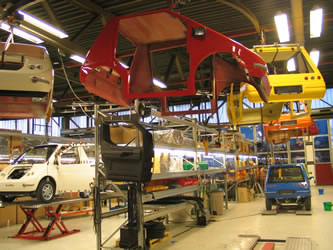 By extension this would then also force production to become more sustainable, on the basis of the now established concept of sustainable consumption and production (SCP). As you will appreciate, this too is very far removed from current practice. However, by substituting our current consumption of large quantities of low value disposable items to an alternative pattern of consumption involving fewer higher value, more durable items, that require support structures to allow them to grow and develop alongside us, we can move towards a situation whereby we still consume and enjoy our consumption, and our consumption can support our economies, but whereby the impact of our consumption is significantly reduced, thereby making it more sustainable.

In the case of cars this may actually be easier than with many other consumer 'durables'. Cars already are capable of a degree of development, while their value to us extends well beyond their mere role as a transport mode. Cars are cultural artifacts, fashion items, symbols of our status, our role in society, political and social attitudes, etc. Classic car owners show that cars can be made to last, although this involves a constant dispute with much of the car industry, which still adheres to a mindset of 'shifting the metal'. Some of this involves making it increasingly difficult for owners to engage with the technology of the car. However, owners are also fighting back, reclaiming their 'freedom to tinker' with the products they have paid for. Such engagement with the product is increasingly important in the move towards SCP. 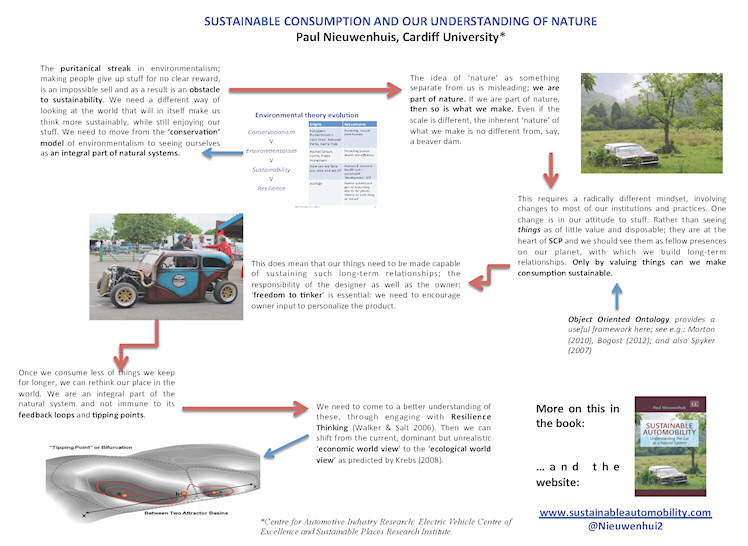 Apart from the challenge of convincing enough people that this is the way to go before it is genuinely too late, the challenge is also how we get from here to there. There are various literatures on how change happens, but much of this also highlights the barriers to change. At the same time, change happens anyway and we have some discretion as to the direction into which such change takes place. Much of it would be based on technologies and practices that already exist in our systems, but that are now marginal. We are often misled by the belief that just because they are marginal now, they will remain so in the future. Here too, an enhanced understanding of natural systems can help, as these often include marginal species that under changing conditions become dominant within the new system. We are helped by the fact that within a generation it will become clear that many of our current practices are no longer sustainable even from an economic perspective, let alone an environmental one. It is also clear that if we can achieve such a shift for motorized personal transport systems – cars – we can probably do it for most other things as well, as the impact of the car is far greater than that of any of the other things we consume.