Most observers are happy to accept the traditional notion that Ford was the first to mass produce cars. However, the car he mass produced, the Model T, was an 'Edwardian' car as we would say in the UK, based on a modular approach to car making as used by the previous generation of craft builders: separate chassis and separate, wood-framed, coach-built, or 'composite' body. Modern mass produced cars are not made like this. They use all-steel 'monocoque', or 'unibody' construction, whereby a structural metal box fulfils the functions of both body and chassis. This technology was made possible by Budd and Ledwinka's invention, around 1912, of the all-steel welded body and the press and jig technology that came with it. Edward Budd and his chief engineer Joe Ledwinka insisted on welding these bodies; the source of many development problems, but also of their claim to have started car making on its current trajectory. Thus modern mass car manufacturing in many ways owes at least as much to Edward Budd and Joe Ledwinka as to Henry Ford. 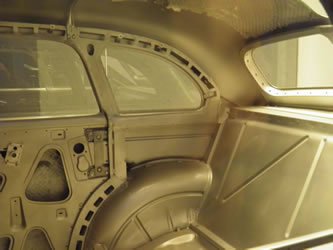 Budd's steel body technology requires very high initial investments, but once made, these allow low unit costs at high volume production – each car made is cheaper than under the previous craft-based system. Budd's innovations constitute the basis for the economics of car making, notably its economies of scale. The main change being from the manufacture of modular cars from largely in-house components at Ford's Highland Park plant, to the manufacture of steel bodies, assembled into cars from largely outsourced components and sub-assemblies in a typical modern mass production car plant.

If we consider how cars are made today and the investments required to make them, we see that the largest areas of investment are in developing and making internal combustion engines, and in making and painting bodies. A car assembly plant's primary activity is the making and painting of car bodies and then assembling them into finished cars by using largely bought-in components. Many of the parts Ford spent so much effort into making more efficiently are nowadays sourced from suppliers. Modern car manufacturers outsource some 60% to 80% of the ex-works value of their cars. Hence a modern car assembly plant is typically subdivided into the following processes, which, combined with internal combustion engines, the industry regards as its core activities:

Press shop – where the sheet steel is pressed into panels

Paint shop – where these steel bodies are painted in various stages

The principal investments in an assembly plant involve the first three processes – the making and painting of steel bodies (Fig. 4.1). And as bodies tend to change far more often than castings or powertrain components, these body-related investments have to be repeated regularly, with those elements not replaced, at least reconfigured, reprogrammed and updated. These investments are such and the resulting breakeven points so fundamental to the business of mass car production that these 'Buddist' investments, combined with investments in powertrain (engine and transmission) now determine the economics of car making. The 1920s and 1930s were the key phase for the roll-out of this technology. By 1925, Budd all steel technology already had a 50% share of US body production.

With Ford's and Budd's innovations, mass car production was possible and the final element involved the means to create a mass car market. This was the contribution of General Motors (GM), which introduced large-scale vehicle finance through its foundation in 1919 of the General Motors Acceptance Corporation. During the 1920s GM also introduced the trade-in as a down payment on a new car and the manufacturer and dealer-run used car business. In addition to these innovations, GM developed the concept of a product range, allowing customers to gradually trade up from a Chevrolet, via Oakland (later Pontiac), Buick, Oldsmobile, La Salle, to Cadillac. In addition, it focussed much more on styling, colour - enhanced by Dupont's majority shareholding in GM – and appearance and it promoted the idea of planned obsolescence through the annual model change.