The concept of diversity is based on that of biodiversity – the notion that a healthy ecosystem relies on the interaction of a number of different species. It arises naturally, in part through spontaneous mutation and also because species operate in niches; each species has a so-called 'fundamental' niche, which denotes the maximum niche that species could occupy in terms of climate, resources, etc. in the absence of competition. With competition that species occupies its 'realised' niche, which is a sub-set of its fundamental niche and it is no different in economies. Without competition, a car company can occupy an entire market, i.e. it holds a monopoly position. In reality, all car companies operate within their realised niches, which can vary over time. 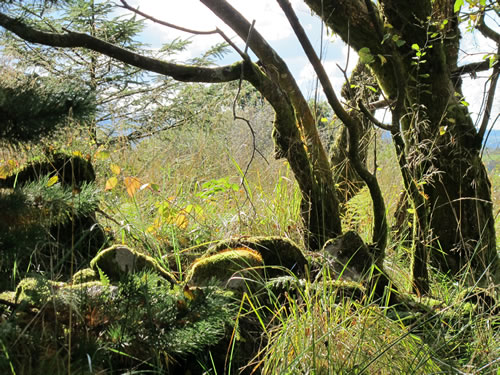 Consider a forest floor, which combines tree canopies of varying size such that few spaces are left empty. Larger trees' canopies cover most of the area, but there is room for smaller trees' canopies in between and yet smaller ones in the spaces left between their canopies and those of the bigger trees. All have access to light, water and other resources according to their size, but there is room for all. In automotive markets the same applies with mass volume producers such as Ford, GM, Toyota or VW covering the majority of the market, followed by specialist mass producers such as BMW, Mercedes or Volvo, and followed by smaller specialist producers such as Ferrari or Porsche. The even smaller spaces in between are taken up by the likes of Morgan, Spyker, Pagani and Lotus. In a saturated community, all niches are filled, while in an unsaturated community not all niches are filled, so there is the potential for an invader to come in.

On the whole, greater diversity leads to a greater productivity in plant communities, greater nutrient retention and greater ecosystem stability. Because species differ from each other they respond differently to environmental changes. The more species this is averaged across, the less variable the total.

Diversity has come to be regarded as desirable in a wider context and in recent years an increasing number of observers has attempted to apply the principle to wider social economic and industrial structures. Diversity implies that for any given stable ecosystem there is a certain degree of apparent redundancy – the presence of species with no obvious role in the system. However, at times of change, these marginal species may become more optimized for the newly arising conditions than the most successful species under the previous conditions, allowing the system as a whole to survive. Change may push an ecosystem to reorganise suddenly around a set of alternative 'mutually reinforcing processes' – where a tipping point has been reached

The industrial evolution has also led to greater efficiency in our systems. However, this efficiency, because of the way we understand it, has also in many cases led to a reduction in system resilience.  Globalization is also part of this process in that cultural differences, which were also expressed in differences in products, in market approaches, regulatory and legal systems and practices, are steadily being eroded. The response to this from many decision makers is to advocate greater efficiency; eco-efficiency is thus often confused with sustainability because of a mindset predicated on efficiency. It is easy to understand this mistake – on the face of it by being efficient in our use of resources we appear to be more in tune with our environment. It is important to realize that this type of efficiency only applies in certain circumstances and is not universally applicable – some human systems, like most natural systems need a degree of redundancy and apparent inefficiency to render them resilient.

An important step in broadening the industrial ecology model is a change to thinking of industries as ecosystems. However, humans can bring insight and therefore foresight to their decision-making. They can be pro-active, while other natural systems are essentially reactive. However natural systems are also adaptive; they adapt to changing environments. In reality there is no reason to assume that humans and human systems are any different in this respect; our insight and the resulting foresight are likely to be adaptations that emerged during our evolution and were induced by our changing environment. Thus far it has stood us in good stead. While it may have got us into a spot of bother with our environment, this is likely to be temporary, as we engage these natural adaptations to find a solution.